I was having a pleasant enough evening though Duncan was finding it hard to settle to sleep and boinged up and down the stairs with his wind-up torch and battered Green Eggs and Ham book. I'd enjoyed the splendid @stephenfry on the rehabilitated @wossy show and was impressed by just how much Tom Cruise resembles a 3/4 size Michael-6. I'd a case of itchy remote finger so flicked the channels about a bit, and then I saw it: an horrific new advertisement by the charity Action for Children.

A few minutes later I saw that Mike had already blogged about it and presented his reasoned objections to the ad. He has also transcribed the voice over:

"I used to lash out if something pushed my buttons or I wasn’t able to do something. Things that wound me up were if they’d insulted me I would physically hurt that young person. My parents sought out help with my autism because it was becoming a pain in the bum. I went to an Action for Children school. I started feeling a bit more friendlier with other people. Thanks to the carers I was able to correct a lot of errors in my behaviour and become a better person. Well I feel a lot more confident thanks to them. I feel at peace with myself."

So there's a boy, an adolescent, who lashes out at people who insult him and push his buttons. People who harass disabled kids are bullies. Dan's would benefit from learning better ways to deal with the bullying but it's unfair that he's been taught to blame his autism which he says was, "becoming a pain in the bum." He was, he says, "able to correct a lot of errors in my behaviour and become a better person." What a great self image(!) Action for Children must be so proud to have a boy feel that he has defeated his nasty autism like that.

It sounds like a classic case of blaming the victim.

I dashed off a rather strident but heartfelt letter to the charity.

"I am the mother of an autistic child. I saw your new advertisement on TV a couple of minutes ago and was slack jawed with horror. It is just so very wrong. I am astonished that anyone thought it would be a good idea to demonise autistic children in such an overtly horrid way. The boy's (Dan's) autism is portrayed as the monster with the nice well behaved boy trapped inside, a reprise of a theme many of us are sick hearing. Who on earth did you consult with before unleashing this monstrosity on the world? How will autistic children feel after seeing themselves portrayed in such a way?

Please think again about what message this portrays. Have you read any of the commentary about autism from the past few weeks when there was lots of media discussion about developing prenatal screening. It was unremittingly awful and biased against autistic people. Your terrible ad will further reinforce the view many have of autism as a miserable thief of children and destroyer of families. Families with autistic members face enough difficulties, discrimination and stress from the lack of understanding of society. Your organisation has just gone and
made our lives even harder."

There's more information about "Dan" here. It just gets worse. 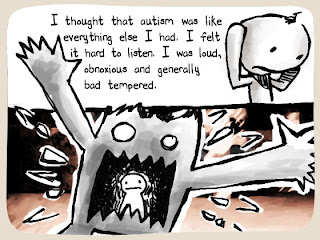 Dan is said to have "a form of autism that is characterised by difficulties with social interaction" but was able to, "find peace with himself at Action for Children's Headlands project." But we also discover that he felt betrayed when his parents left him at this residential school and he sat alone, really upset, in his room for ages. He says it took him a year to feel a bit steadier.

I have to wonder how Headlands school treats autistic children. This is the image of themselves they choose to portray; a vulnerable and sad child, blaming himself for his problems, sitting around alone for a year before he accepts the friendship of his wardens teachers.Then he's shown as finally breaking free of the autism monster that has been entrapping him. Zipidee-doda.

I've had enough of this crap. It's bad enough when it's a contrarian old crone writing in the Daily Fail who is penning horrible portrayals of children like my son. It's a whole lot worse when it's a major UK children's charity. Action for Children say they are

"committed to helping the most vulnerable children and young people in the UK break through injustice, deprivation and inequality, so they can achieve their full potential."

With this campaign they have failed the people they seek to help.

If you object to this ad, please email gary.day@actionforchildren.org.uk
at 9:38 am

I love the way that you link this to the debate about pre-natal screening. Who wouldn't want to prevent little monsters like that from being born? If that is what people think autism is they will take any test and go to any lengths to avoid having an autistic child.

Well exactly Mike. This is just another example of the prejudice against autistic people.
And thanks.

Blimey I had to watch it four times [lots of interruptions.....] I suspect it just needs a lot of editing such as different pictures / film and keep the script to the last two lines that Dan speaks......then it would give an entirely different message.
Cheers

Just had a reply from Gary Day from Action for Children; I posted it up in the comments of my last post...

I've had enough of this crap too, Sharon.

I've just written a blog entry asking people who have contact information for Action for Children's major donors to post it. This is part of what was done to get the Ransom Notes ads withdrawn.

@Abfh, great idea. I'll see what I can find out. I read elsewhere that their main donors are local government so no good to our campaign, but there will be others.

I say hit 'em in the PR department:

I left a message about the impending doom of the Dan Campaign on Brand Republic's website.

Please join me. You do have to register but I think it's worth it...

The sense that bullying will not be tolerated is rather conspicious by its absence :{.

Having seen the advert and read your and Mike's posts on this ad, I sent an email to AFC expressing my concern over the portrayal of ASD in the advert. Them showing Dan as a monster seemed bizarre to me, as it seems to be inconsistent with AFC's work in other areas (they actually complain about demonisation of youngsters in one press release - which is exactly what they themselves are guilty of in their ad).

@bullet, yes I saw that. There's no mention of ideas like, "while I was learning better ways to deal with my anger, the bullies were taught that making fun of disabled children isn't OK."

@jdc325, thanks for doing that. You'll probable get the form email they've sent everyone else, saying it's all Dan's fault that it's his words and pictures. Hiding behind the emotions of an autistic child who has been sent away to a residential school and who told how he felt betrayed and sad for a year there, is rather a pathetic excuse.

Have you a link to that press release please?

saying it's all Dan's fault that it's his words and pictures

This isn't actually what I was thinking of (I'm afraid I can't find the press release that I mentioned earlier), but there is a report on children's policy in Scotland written by Malcolm Hill which refers disapprovingly to "a tendency to demonise [older children] and to fail to see young people’s viewpoints". Somewhat ironically, this is in a paragraph on page 3 of the PDF that begins by pointing out the "duality [that] has been evident in New Labour policies and rhetoric towards children". There seems to be some duality in the AFC rhetoric, IMHO.

[Note: I had to do a site search to find this, as googling for "Action for Children +demonise" seems to bring up nothing but critical blogs and the Facebook campaign. Which is good news.]

@jdc325, thanks for that link. It sounds hollow when the organisation which wrote that report then opts to release an ad with a child shown as a monster until they managed to tame him.

It's nice to see the google hits going our way.

Is there anyone that could turn my new set of pics into a vid?

I'll have ago myself but I've not a clue where to begin...

Wow. Mind blowing how clueless Action for Children is on this whole thing.

Action for Children has made another ad that parents with MS find almost as horrifying: I haven't seen it (I'm in the US, so they don't have those ads here), but apparently it features a young girl who has to take care of her Mom because her Mom has MS. And Action for Children helps her. Parents are incensed because it implies that children automatically become carers for disabled parents (when they don't, or shouldn't have to).

I suggest that the campaigns against both ads (the autism ad and the MS parent ad) would be more effective if they were to work in tandem. I also suggest that letters should focus NOT ONLY on removing the two offensive ads but ALSO on urging Action for Children to consult more closely with disability groups in the future for ALL relevant ads.

I'm also sick of this. People have got to stop blaming the child. Why do we live in a society that encourages sociopathic behaviour in bullies and self-depricating behaviour in the victim?

I never seen this ad- I hope it gets taken off television.

It's almost as bad as that awful documentary "Make Me Normal" on channel 4 where the teachers ade the kids feel ashamed of their autism. My school never did that to me- it's an outrage!

Thank you for this.

@anon., thanks for your comments. Thankfully the ad is off the air now but there had never been a full apology or acceptance of its harm from Action for Children.
The Advertising Standards agency should rule on the many complaints they received on the ad next month and I hope the uphold our complaints.

I remember that documentary you mention, and how horrible it was and how children were encouraged to blame their autism for all their problems and almost to hate themselves.