New Moon, headbanging and thinking for oneself

Duncan continues to take great pleasure in producing various pictures of Chuckie from the Rugrats. Is it perseveration? Do I care? Each picture is different in at least some small way. I think they're cute and funny and witty. 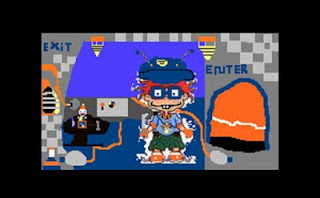 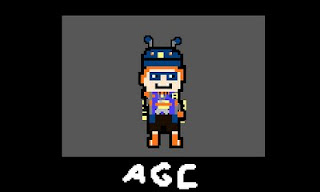 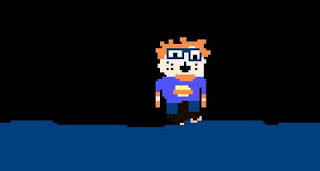 Thomas doesn't like to draw. He'd rather do maths or count the money in his Tardis money box. (I don't mean it's bigger on the inside, it's just shaped like a Tardis.) We've been doing some P4 stuff on Education City (free trial) and he's acing it all. Lady has used that site too and they both quite like it so I might subscribe. Does anyone have a code they want to share?

He's also decided he wants to try school after we return from our holiday in February (2 weeks in Orlando!) He says that everyone else in the family has been to school at some stage but he never went to nursery or school so he wants to see what it's like. I've been reading the prospectus for various schools and quizzing our friends and neighbours about what they think of the school they/their children go to.

Graham Badman and Ed Balls, do you see what I'm doing here? I'm listening to my child, I'm gathering information to help us both make the best decision about his education. It's not a matter of my rights clashing with his, despite the mistaken way in which you think about parenting and the duty on parents to ensure their child receives an education. If he's happy to go to school and it works out for him, then fine, he goes to school. But if he doesn't like it, he will be deregistered and his education will continue to happen at home and in the community as it has so far with great success.

So what else- we watched the latest Doctor Who, The Waters of Mars which was terrific, and taught that the homeopaths were wrong; water has patience not memory (via @jackofkent). Also, Gordon was in the US for a week but the children were still able to see him thanks to the magic of technology. Here's a screen grab he took from his hotel room in Boston as he spoke to Duncan and I via Google video; 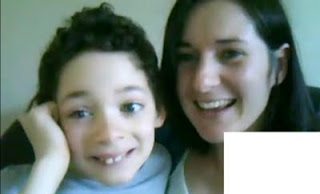 What wasn't so nice was the cuckoo clock falling off the wall (where I had fixed it-guilt!) somehow and onto Thomas' head. He was sore and bleeding so I called a friend and neighbour who kindly rushed around with her little girl to stay with Duncan and Lady while I took Thomas to get checked out. The bleeding stopped quickly but you don't take chances with bashes to the head. I went to our GP 1st as it's very close and told the receptionist what had happened, her question floored me (not really) -"Does he have an appointment?" Yes really!

She advised me to take him to the Minor Injury clinic in town so I did and he was seen and sorted very quickly. Thankfully there was no evidence of serious harm and he didn't even need a stitch.

The following morning my neighbour minded my children again while I met with a psychologist to discuss Duncan and to seek advice on issues I wish could help him deal better with, like his impulses and angst driven shouting. I don't know how useful it will be. She used the word "behaviours" which I dislike intensely. I've been given an assessment form to fill in; ABAS II for those familiar with such things. It's interesting, but leaves no space to detail many of the skills and abilities he does possess, but I suppose they are deemed "non-functional" or something.

Lady continues to work hard at gymnastics. She trains for over 15 hours a week and loves it. I watched her at cheer-leading on Saturday and was so proud of her strength and poise. Her acro partner and sister are visiting today, no doubt they'll be showing off to me on the trampoline.
I took Lady and her close friend (who lives next door) to see New Moon, that Twilight film yesterday. Oh my, what hokum. The girls enjoyed it even as they were laughing at how silly so much of it is. That Bella Swan girl is so pathetic, glum and wan. She never does anything but mope and have nightmares. Has she no hobbies? Her face would break if she cracked a smile. The girls can easily see she's taken all that first and fiery love thing too far- jumping off cliffs and riding motor bikes with no helmet just to produce ghostly ticking-offs from Mr Chalky.
They both thought Jacob the were-boy was the better bet, if forced to choose and I think they're right. Both have acknowledged the inherent ridiculousness of getting involved with anyone who could either claw or bite you to death at any moment and do not think it's romantic, just that it makes (for them) for an engaging fantasy.

I say this as some of the chatter on the Twilight series warns of the danger to girls of thinking that bad boys are best; but I have much more respect for girls' ability to see it for what it is, a rollicking bit of escapist nonsense.

I laughed a lot, and was elbowed fiercely by Lady. It's not supposed to be funny when Edward with his LOW slung trousers starts to unbutton his shirt in the sunshine, but it really was. He has such big hair too, I wonder what product he uses, something specially developed for the dead? 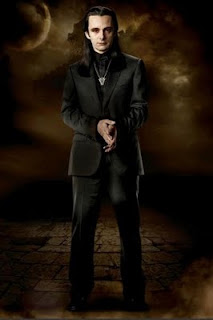 Michael Sheen was great fun as an evil vampire overlord. It was extra delicious since I think of Tony Blair whenever he's on as he's played our previous beloved leader twice in film and will do so again soon I've read. So I was watching and thinking that the evil leader of the vampire council is Tony Blair. Good job he didn't get the European presidency he sought, dread to think what he's have done with the increase in power. 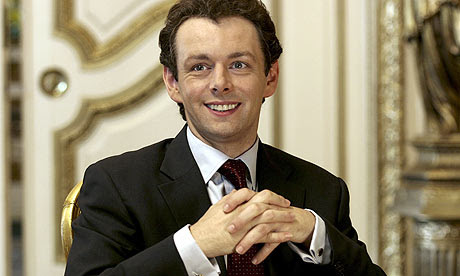 With all this nonsense I end. But having read Mike and Sarah's posts on the latest pile of bile from Minnette Mirrin, I'm rilled up enough and will be back with some whinge blogging imminently.
at 9:26 am 3 comments:

For your viewing pleasure...

It's Duncan's most recent production. The music is by his current favourite singer, Michael Jackson. He likes to listen to his CD in the car and prefers track 1 from Off the Wall.

Sadly my friends in Germany will be denied the joy of watching this random video as Sony Music have blocked it there, boo hoo.

Email ThisBlogThis!Share to TwitterShare to FacebookShare to Pinterest
Labels: art, autism, funny, what they do

Duncan has been working on some important skills. His current favourite video is shown below. He's watching it right now beside me and just cracking up. He keeps saying it's a "TV Burp" thinking about the TV show we watch together sometimes.

His ambition it appears, is to emulate the burpability of Buddy the Elf, and he's been practicing hard. It's such a delight to hear him burping or, to use the terminology of my childhood, rifting, when we're in the car together. I suspect that if I stay stoic and blandly keep telling him to be polite he'll get tired of this soon enough.

Like many nine year old boys, he's discovered the power of cursing. It could be worse. He knows that I don't want him shouting rude words (at least until he can determine when it's not going to upset people to hear him). He's sort of tempering it; now while playing his Gameboy he expresses his frustrations with "What the!" He sometimes shouts "oh F...OX!" but I know what he means. Little rapscallion.
at 8:52 pm 6 comments: