We took a walk through the forest. Duncan elected to ride in his wheelchair. It's just the right size for him and he's pretty comfortable in it, thank goodness. It's not really designed for forest tracks but as long as we kept on the bigger and smoother paths we were fine. He got out and ran about now and then too, and they all had a good splash about in the burn. Lady told me stories about all the forest residents; fairies, sprites and goddesses in the trees and water and the two warring werewolf tribes, the protectors and the flesh eaters. Apparently ivy and holly repel the flesh-eaters and the few scraps of cloth we spotted caught in the bushes were left over when the wolves transform. She and her cousin A. thought all this up, with the help no doubt of Harry Potter, Twilight and I think, some Enid Blyton stuff thrown into the mix. 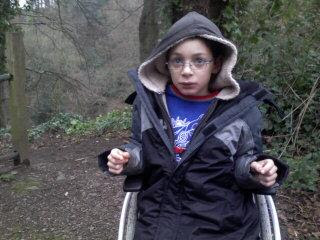 Duncan trying out his wheelchair. Though he looks kind of worried, he was very content!

Duncan was wearing an old pair of Lady's glasses. They have blue frames so help him look more like his hero Chuckie Finster 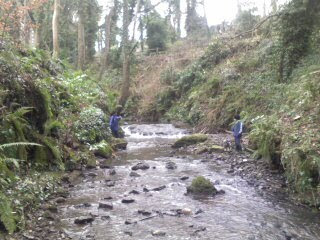 Lady and Thomas test their wellies and prove that so long as the water doesn't rise above the rim, your socks stay dry. 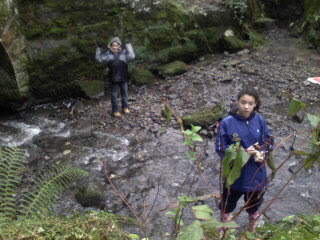 Duncan finds that chucking stones into water can be a most satisfying pursuit.
The dog was in heaven dashing about sniffing out the holes and burrows and avoiding the water as much as she could. I panicked a bit when 3 sheep ran out on the other bank close to her: they must have got out of their field. Thankfully she came to heel and I was able to clip her lead back on without her running after them. Poor Duncan was a bit stressed but soon cheered up when we set of in the direction of the Spar and he got his hands on the first Creme Egg of the season.

Later Thomas had gymnastics for 2 hours; squad training. He came out with yet another trophy. We joked about how all this winning was just getting boring now. Then I took him off to his 2nd Tuesday class, an hour of jujitsu. Lady has dropped this one but Thomas still loves it. He's a green belt now. I can see him sticking with it all the way to black. He's an ambitious wee lad, and hard working, unlike his Mam.
at 7:32 pm

I love chucking stones into the river as well.

Great to hear Lady's stories and where they came from.

It looks like you're all having a lovely time. The river reminds me of the time my parents took myself and my sisters on a walk when I was 9 which involved wading across a river. Shoes and socks obviously had to come off and my dad held onto my hand whilst I was supposed to hold onto my shoes and socks. What I actually did was happily let go of said shoes and socks and calmly watched them go bobbing down the river. Then when dad noticed they were missing, I calmly pointed them out as they headed rapidly away.
I don't think I've ever seen him move so quickly :D.

Throwing Enid Blyton in the mix, I am glad to inform you that I have published a book on her, titled, The Famous Five: A Personal Anecdotage (www.bbotw.com).
Stephen Isabirye