There was something odd about the sky. It was the wrong colour and a peculiar big yellow ball was visible overhead. This might have been linked to the strange feeling of warmth on my skin when I went out, but I don't want to mistake correlation and causation. I ran with the dog down through the park, beautiful with the last of the bluebells and pungent in places with wild garlic. It was early and few people were about so I slipped her lead off. I tested her recall by sitting down every so often, calling her over for a cuddle and praise before sending her off again. She was great, exploring but watchful. The beach was deserted except for ourselves and the birds. It was perfect.

Gordon cooked a Jamaican style breakfast with supplies brought over from their recent trip to Oxford. It's harder to get hold of such exotic foods in Northern Ireland. Then I took 2 children to jujitsu and dandered the shops while they worked it. I lost track of the time and had to run up the hill to the sports centre to meet them when it was over.

One of Gordon's Jamaican aunts died suddenly last week and his mum decided to go over to be with her last remaining sister for the funeral. It's a long and arduous journey so Gordon will accompany her. We decided that Thomas and Lady should take the opportunity to go and meet some of their Jamaican relatives too. Thomas has never been and Lady went when she was only 5. It would be too much for Duncan so I will stay home with him. Well, I'll stay home for some of the time, for i will be off to London at the weekend to stay with my little sister who will be celebrating her 30th birthday. My marvellous dad will look after Duncan then, and even cancelled his own trip t London to allow me to go. What a brilliant dad he is.

So during the day, we sorted out flights and hotels, insurance and car hire. They have now planned a fantastic trip to combine family duties and attendance at the funeral with a few days relaxation and fun in a nice hotel and the opportunity to tour the island. Gordon's mum will spend all but the 1st night with her sister.

Am I jealous? A little, but Duncan and I might do something fun ourselves! 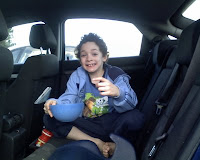 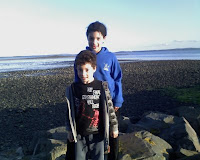 In the evening we all realised we were hungry and someone had the inspired idea to go the the chippy. We had the best fish and chips for miles in the car (we eat in our car a lot as a family, not being the most restaurant friendly bunch just yet). Then we headed off to enjoy the last bit of evening sunshine with a drive. We stopped off at Strangford Lough and the children all had a good run around, collecting stones and shells and getting their shoes and trouser legs wet as you're supposed to on such occasions. 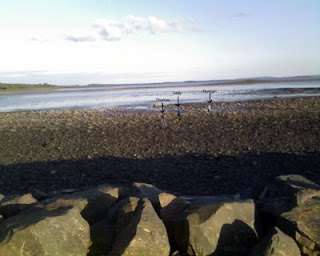 Full as I was of starch and protein, there was still plenty of room for contentment, peace, and joy in the life I find myself leading and the people who are with me on this voyage.

(The photos aren't great as I took them with my poor quality phone camera. I still like them though.)
at 1:57 pm

Email ThisBlogThis!Share to TwitterShare to FacebookShare to Pinterest
Labels: days out, family

A real fun day, I almost feel I was there!

I didn't recognise that shiny orb either. So I sat in the garden in my tinfoil hat with a home made John 1:13 sign, just in case....

Oh we love a bit of in-car dining too.

I don't think I would like most things about Los Angeles, but drive through restaurants, banks, chemists and supermarkets would be pretty sweet.

And the best part is come the apocalypse - we in car dinners will be able to live on the scraps left under the seats, while everyone else is eating cockroaches....