Gordon, lady and Thomas have just left to make the first leg of their journey to Jamaica leaving myself and Duncan behind. I've been thinking for a while that the 2 of us should also head off somewhere while they're off gallivanting around the West Indies. I asked the boy where he'd like to go, giving a choice of Legoland, Thomas Land and Disneyland Paris. He chose the latter, not that i expected anything less. So I had a look and managed to find a really good deal on the hotel and park tickets and I've booked it.

So, Duncan and me fly off by ourselves on Monday. He's already planned his itinerary. It should be great. Though it's a bit scary to go somewhere so busy without another adult. Yikes! 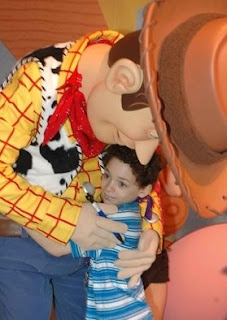 Going where folk like this hang out.
at 6:56 pm

Email ThisBlogThis!Share to TwitterShare to FacebookShare to Pinterest
Labels: family, getting away

Well done you! Hope you have a fantastic time together. You'll be fine without other grown ups because you'll both have to look after each other. Enjoy.

Sharon, you know the ropes and that you will be well looked after while there.

Enjoy this special time together.

Sure you know this but don't forget to get the Blue Card Sharon! You just need to bring a letter of diagnosis and then you get a special pass to be going in the exit of the rides, meaning no queueing. I have never done Disneyland myself (not enough valium in the world for an all autie family to attempt it) but I got a guest blogger to write about it.
check this out
http://irishautismaction.blogspot.com/2009/02/euro-disney-part-i-big-sisters-story.html

Part one of a three parter. Good tips on transport too.
xx

safe travels and looking forward to reading about your adventures! we've yet to take Charlie to Disneyland/World (with lisadom about this.....)

Have a wonderful time!!

hope you have a wonderful time! looking forward to reading about it

Didn't you all just go to one of the Disneys last year???

Good thing my kids don't read blogs. I'd be in REAL trouble.

I'm not too sure if it's still there or not, but you should bring Duncan to one of the character restaurants in the Village one night. He'd love it :)