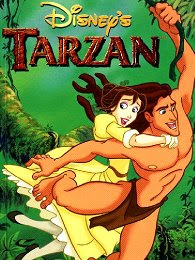 For the past few days, it's been all about Tarzan for Duncan. He has watched loads of clips from the Disney film on YouTube. He then found other versions of the story, including a cheesy 70's animation. I've listened to (endured?) countless Phil Collins songs. I actually really like the soundtrack, and the Disney film which I bought on video for Lady when Duncan was a baby. The scenes of the baby at the beginning of the film remind me of those days and my own wriggly boy and I can't watch them without getting a bit teary eyed.

He must have listened to this slice of euro-pop a hundred times today. (Be warned, clicking that link may irritate!) Somehow I've managed not to go bananas.

And of course, the pictures are produced and the Dogz are

adopted and named. On the left are Tarzan dog, wearing his little brown loin cloth, and Jane dog, pink skinned and pretty in a yellow dress and Panama hat. 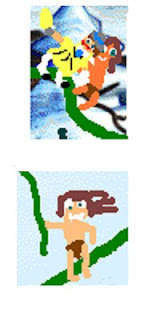 On the right we have Tarzan rescuing Jane, who is gripping her yellow umbrella.


The bottom picture shows the lord of the jungle himself, strong and wild, swinging on a vine with his hair flowing free.

I wonder what will catch Duncan's imagination next?
at 11:35 pm

Email ThisBlogThis!Share to TwitterShare to FacebookShare to Pinterest
Labels: art, communication, films, home-education, what they do

Did Duncan make those bottom pictures himself?
They're really sweet!

Thanks Helen. Yes, he drew those himself.