Read It! (and a Reader Request)

That's what I hear over and over these days. It may be when we're driving and I look in the mirror to see a little hand pointing out the window to a road sign or a poster in a estate agent's window or the name of a petrol station. It may be when we're looking at a book together or when he's using the computer or he may be looking at a packet of crisps, ('Tayto Onion Rings').

In his own way, and with zero stress, Duncan is learning to read.

He's also learning to type. Here are some of his recent 'invented' spellings;

The Gerrar (Bagheera, from the Jungle Book)
Mogley (Mowgli, as above)
Pinck mad mouse (I love the use of 'ck' at the end)
sasagtas (sausages...I'm not sure why he has a 't' in there)

However, I have only to show him once how to type a word correctly and he remembers it. Most of what he types in Google, Youtube or to name his pictures is spelt properly.

We had loads of fun playing a demo version of 'Roller Coaster Tycoon', a game in which you design your own fair. I'll have to get the full CDRom as the demo cuts out after about 15 minutes of play. That's one idea for Christmas.

Duncan is still enjoying playing with his Dogz 4 game. He now has learned to take a screen shot, paste it into the Paint program, cut out the part he wants and paste that to a new file where he expands the image then paints and adapts it to suit him. 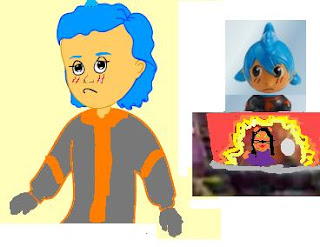 This is one of his pictures. The toy with blue hair was in a Kinder Egg. Unfortunately he lost the toy, but we managed to find a picture of it on the Magic Kinder website.

The boy is an edited image from the excellent Starfall learn to read site. It's on the Who Am I? section.

The toy is sitting in a car from the Mad Mouse roller coaster. This is another edited screen shot. I helped him a bit to draw the mouse, but he did the rest by himself.

I love his vision!

Here's a request to anyone who reads this.

If you happen to buy a Kinder Egg and find the toy shown above, I would be ever so grateful if you would be willing to send it to me. Duncan was very upset to have lost it and we have bought about 20 Kinder Eggs since then, but have not found it again. Lady says it's like looking for the Wonka golden ticket. But this is valuable only to us!
at 10:14 am

Learning to read, huh? Good for him! My little sis learned to read just that way--asking Mom repeatedly what words said, and then picking up the rules. Eventually Mom just gave in and taught her phonics--she wasn't in school yet at the time, and I guess Mom was getting tired of reading everything for her! Kid's plenty smart... she's 11 now and getting straight A's! (She's also an Aspie like me. I think she is hyperlexic.)

Looks pretty skillful to me! We don't get Kindereggs very often, but I'll keep an eye out.
Cheers

Hi. I have taught him phonics too. mostly by typing things into the search engines on his computer for him, and sounding out each letter as I type. We use a phonics program every so often too, and we read together every day. It's nice that he is picking up the reading bug!

Thanks Maddy for offering to look out for it!

its nice to find more homeschoolers!
**bookmarking your site*

Very exciting! I would just melt hearing my daughter learn to read. I think it is a miracle she can read and am so thankful! I love the drawings. Kids drawings are so amazing. I put my daughther's drawings on her own blog that I keep going for her. She loves looking back at what she has done and we count it towards homeschooling. It is lots of fun. You can check it out at www.maiziebaltes.blogspot.com
I am going back into your archives to catch up.