I'm just being ironic...but it's my blog, I'll be ironic if I want to.
I'll also post a dull-to-read catch-up of the past few days if I want to.

So Friday, it was a cold crisp sort of day. I took the children to a big Tesco supermarket. I had to buy markers for the budding artist and the big sets sold by Tesco are the best we've had. I took a trolley, and feeling a bit like I was about to invite a bull into the Belleek show room, went into the shop. Thomas rode in the trolley and I'd asked Duncan to hold on and help me push. He dashed off right away to look at some comics, but came back when I called him. I'd told him we were buying markers and doughnuts with pink icing (the best kind, apparently) so he knew he was about to benefit. We passed a display of Thomas trains and again he went to have a closer look. We examined a few engines, then I asked him to put them back and...he did! No problems so far. Next we picked up the doughnuts then Duncan and Lady helped me put a few other items in the trolley. Duncan was singing as we went, 'I want you back' by Take That. Lady told me proudly that some teenage girls were smiling at him; she reckons they thought he was cute! We didn't buy much, I didn't want to temp fate by going beyond Duncan's comfort limit. But I was so pleased with how well he managed to deal with all that temptation, to choose to stay beside me and to even help.

Afterwards, we went to a lovely little playground, overlooking Belfast Lough and the children had fun and I played chase to keep warm.

On Saturday I took the boys to another playground for a run around, while Gordon and Lady went to the sports centre for their Saturday gym/Jujitsu sessions. I called into a shop with Thomas and Duncan and this time had much more difficulty controlling Duncan. I wondered afterwards if it was having the trolley that he could push and hold on to, that had helped him to stay calm the previous day.

Well, we called up to see Gordon's Mum for a while. She looked after the children while Gordon and I escaped for a quick, grown-up lunch at a nice wee cafe. I do like it when we have a little break like that.

My brother called to see us on Sunday. The second he came in the door, Duncan ran up to him saying 'chase me!' Obviously that's what big uncles are for. It was a lovely sunny day and the children played in the garden for ages. The children from next door care over and Lady and her friend disappeared upstairs. I heard them giggling in the bathroom and my special trouble sniffing sensors were alerted. They had the guinea pigs and our digital camera, and Lady had taken loads of photos of their exploits. She had decided she wanted to send in a photo to one of those little-girl comics, since they're always publishing photos of cute children with their pets. There wasn't much point in her denying any wrong doing, since there was a load of evidence of what they'd been up to on the camera!

Also on Sunday, my sister abseiled down a 40m high building in London, to raise money for the Macmillan cancer charity. She's a Macmillan nurse herself. She was terrified, it was windy and lonely (she told me after) but she did it. I'm so proud of her. Go C, ye big gir-ul ye!!! 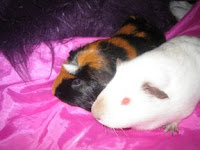 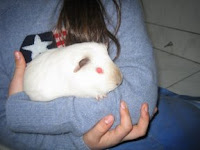 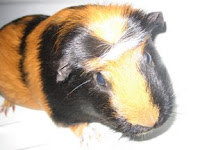 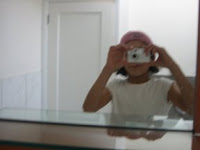 Cheers for Duncan----how many times have we not visited a store due to such temptation (packs of sushi, Barney videos---Charlie has learned to walk away from the latter). Hope the guinea pigs got through their "photo shoot" all right.

Digital cameras are the best invention yet, almost trouble free for children [unless they drop it of course.] Great way for a parent to gather evidence of what they're actually interested in [although it's usually to close up / blurry to be sure.]Cheers

As for me, I only had to look up one word (abseil) to confirm that it is the same as the American rapel. I can't see the American legal system ever allowing such a charity event to happen nowadays here, unfortunately.

In closing, I must say that I'm a bit disappointed:

I rather thought that all of Ireland was filled with bogs, mists, golf courses, pubs, and little shoppes. None of those big, boistrous supermarkets. Oh well, another preconceived notion laid to waste. :)

We live at home with a dog (maltese not tiny) and a hamster and my autistic son loves both.
BTW, Nice photos.

Sorry if I am disturbing you but I have had a comment (in my blog) from a "sharon" and I do not know if it is yours. Please let me know.
Thank you
María Luján

Kristina, it's a great development that I can go on a short, planned shopping trip with Duncan now. We tried it again yesterday, and it's certain now that having the shopping trolley for him to 'help push' keeps him on track loads better.
The piggies are fine!
McEwan, There were lots of good, well composed photos in there, some showing Lady's friend so I couldn't post those.
Club 166, there are still plenty of mists and bogs and pubs et al. But the big out of town spread of shopping centres look much like those anywhere else. In fact some of them look worse, there are some shockingly horrid developments dating from a decade or so ago.
Hi Maria, thanks for your comment. It's lovely that your son likes his pets. Duncan would love to get a dog as the guinea pigs don't interest him much. We will not get a dog anytime soon though.
And it wasn't me who commented on your blog, I usually leave a link so people will see who I am when I comment somewhere.
It's some other mystery 'Sharon'!

(I did read it really quick though..just in case;)