Duncan keeps drawing his own pictures. He creates loads of them every day, big and small, pictures of trains and cars, film and game characters and logos. He often writes little notes on the pages too, like his picture of a snake labeled 'Vodermot sayk', which wasn't a bad attempt at 'Voldermot snake'. (It's a Harry Potter thing, for those not in the know!) It's all a perfect example of child directed learning, or personalised education or whatever jargon term takes your fancy.

I have to admit, I was astonished at the two pictures he produced, entirely indepentently, and which I have included below. He completed and cut out the Pinocchio picture and brought it to me, so I would put a string on it, making it into a puppet. He then started dance it about and sing 'You've Got a Friend in Me' (from Toy Story). I love the detail of his picture; the bow tie and the little black waistcoat are both included. 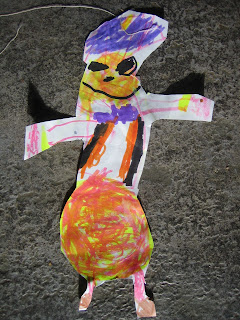 The following day he drew a picture of Harry Potter. Like the Pinocchio picture, this was done from memory, and shows the character from behind which is how he's usually seen in the HP games. Notice the nice little pink ears peeking out!

I'm going to have to buy a job lot of marker pens to keep up with him. He still hasn't got the hang of putting the lid back on the pen when he's finished with it and then gets frustrated when the particular colour he wants has dried out. I find it amazing though, how this has just suddenly started, when for ages he really resisted picking up a pen or pencil at all. In the 2 or 3 weeks since he started drawing and writing, he has made lots of progress. Now I'm finding little pictures all over the house.
home-education autism Northern Ireland
at 10:49 am

The Jedi Family of Blogs said...

Such wonderful pictures! I love his eye for detail... now that he's started, the sky's the limit! :)

I am an Art Therapist and have been working with children on the Autistic Spectrum for 6 years. I am really interested in knowing at what age Duncan first started to use crayons, markers or pencils as I am researching the use of art in early intervention work with autism.
Thank you
Raksi,
Derry

Hello Rachael.
Duncan only started drawing for himself when he was around 6. He refused to try to make pictures before then as he was more interested in the final product than the process, and he wanted his pictures to look as close as possible like whatever it was he was copying. He was happy to play in paint as a sensory thing, but not to make any kind of picture. He directed me as I drew for him for about 2 years before he was willing to draw for himself.

He mostly uses the computer to draw now, like when he made these pictures.