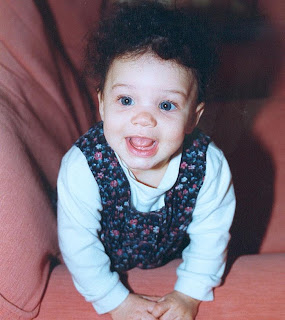 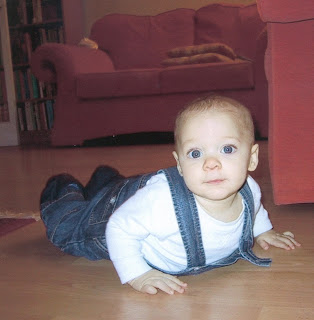 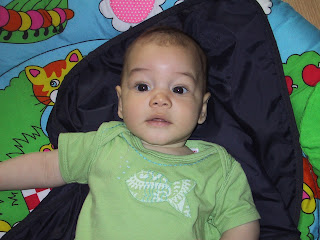 Thomas
Lady was just admiring the photo of her brother on the last post, and I was telling her what I'd written about. She said that I should write, 'I don't mind autism because Duncan wouldn't be Duncan without autism and he's a nice boy, he's very funny and he was a cute baby.' She wanted me to include her opinion, so there you are. She also asked me to include a photo of Duncan as a baby and just to show off my gorgeous children, I've put up pictures of each of them.

Another brother and SIL and their children came for a visit on Saturday. Lady and her cousin A (who's just over a year older than her) had a great girlie time together, playing with the guinea pigs, dressing up, making up dances and acting out Harry Potter games. Thomas and my only nephew were together all day, Duncan joined them in building a huge train track in the living room. Gordon had to work in the morning but joined us for dinner, and Dad and G. came in too to get a chance to see everyone. It was another nice, family day.
It didn't hurt that the Irish rugby team roundly defeated the English...in Croke Park!

On Sunday we went to a Potato Fayre; why its spelt like that I don't know. But anyway, there was a donkey, who was coping admirably with hundreds of small children feeding him hay, a horse and trap jogging around and stalls with hundreds of potato varieties. A band was playing, and Lady and Thomas had a go at chucking a welly boot as far as they could, each winning a prize (pens and rulers) for their efforts. I'm making it sound a bit like the fair in Father Ted (the world's worst funfair) but it wasn't quite that bad ;-)

We walked down to the beach after, all the children eating ice-creams in spite of the low temperature and drizzle. Duncan was fine until he saw all the dogs out walking and then he got upset that they wouldn't tickle him!

He (and Lady) desperately want a dog. I'd consider it and could possibly be persuaded, but not Gordon. I recently read about how the Irish Guidedogs charity have been training assistance dogs for autistic children. It appears they have been very beneficial for these children. Now if someone was to offer us a well trained dog like one of those, I'd be pretty keen. But so far, only people resident in the republic are eligible.

Email ThisBlogThis!Share to TwitterShare to FacebookShare to Pinterest
Labels: autism, family, guinea pigs, what they say

Tell Lady that she was a cute baby, too, and that she's a great sister.

Cute pics all around.

We are mid dog debate too. They have similar programmes here with dogs for the disabled and specifically for autistic children.
Best wishes

No dog debate here----there is a therapy dog training program here too but we will pass!

hi, Nice blog. We are a homeschooling family living near kinsale. Our kids are 10,8,7,4. We moved a year ago from Germany - but I come from Scotland and the kids are brought up bilingual. So, Ireland was a good choice for them to pratice their english.

Hi Nicola
Thanks for visiting and I'm glad you like the blog. I hope you're all enjoying living in Ireland. I've spent very little time in Cork so far, but what I've seen is lovely.