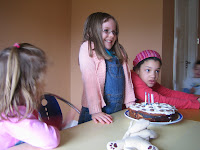 On Sunday, my brother and his family here visiting along with Dad and G (my step mum). My niece C will be 5 next week, so I made a birthday cake. Gordon made a vat of chili, I made some guacamole. (Lady was eating this, along with a few tortillas, and wanted to know if it was Irish food!) Then I brought out the cake which was demolished so fast that poor Gordon, busy making everyone coffee, didn't get any. He needs to learn that if he's eating when my family are around, he needs to move fast! 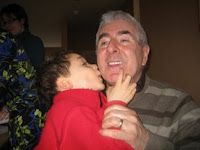 It was such a nice day. The children amused themselves all day, playing on the trampoline and in the house. Duncan spent a good part of the day in his room playing with his trains, or on the computer. he was quite content. He and my dad went for a little walk together too. Dad was so pleased to hear Duncan's great reading, and to see the nice little train he's drawn recently. Here's the two of them, playing a kissing game.

The next day, Duncan was quiet and drowsy. He lay beside me or on my lap getting loads of cuddles while I read to him. He has a cold, as do Lady and now me. I was a bit concerned that he's be too ill to go with us on Wednesday, on our trip to the Exploris Aquarium, but he was fine. I just wrapped him up warm and packed a lot of tissues. 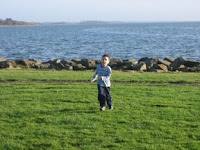 Wednesday was an unusually warm and sunny day. I really enjoyed the drive down the Ards Peninsula, past the beautiful Strangford Lough, on clear roads and in my shiny, new car. There's a special light in Ireland, the colours were clear and bright; green hills, brown ploughed fields, blue lake. It was gorgeous. I stopped to take a photo on my way home, and Thomas decided I should take one of him running, so voila!


The aquarium is a great place to visit, though I had to do a lot of running after Duncan, calling to him to STOP...as usual. He remembered that when we were last there, about a year ago, there was a cafe where he'd eaten a pink donut. So of course, getting back to the cafe was his prime objective for the whole time we were there. 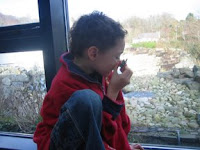 We arrived in time for a talk at one of the touch tanks and Lady and Duncan were able to stroke rays, hold a starfish, and pass around a dogfish egg. Thomas didn't want to touch anything. We passed the other tanks and went to watch the rescued seal pups. They will all be released back to the sea when they're old enough to fend for themselves. They were very obliging though, swimming right up against the viewing window in their pool and showing off for us.

Trevor the Traction Engine (as shown with Duncan) enjoyed the trip too.
at 11:29 am

Email ThisBlogThis!Share to TwitterShare to FacebookShare to Pinterest
Labels: birthdays, days out, family

What lovely pictures! That lake is enough to make me wish I could visit!

There is a huge aquarium near us which we visit occasionally but it's always a bit fraught as quite a lot of it is in 'half light' - you can imagine the effect that has!
The 'running off' and 'bolting' doesn't help much.
So glad that you had such a positive few days.
Best wishes

Thanks Abfh, there are lots of lovely places to see around here.

McEwan, this aquarium is small and well lit, making it a much more suitable place for us to visit. As it was, while most of the children were taking part in one of the displays, Duncan and I were sitting drawing trains and practising reading.

It looks beautiful in your part of the world.

Hi Sharon, sounds like a great trip out. My own experiences with Exploris were mixed - great interiors but a little upset when my 4 year old girl slipped on the mossy pavement outside and my 2 year old made a break for the duck pond at the same time.

My nephew has just been diagnosed with mild Autism (as well as behavioural and learning difficulties) and I enjoy the trips out he's made with me and my kids. I'd like to hear more stories like this.

Hi Allie; it is beautiful here. What amazes me though, is how few people are visiting the tourist sites or driving on the beautiful roads. While huge crowds flock to Cornwall or the Lake District, there seem to be few people visiting the North Coast or the Mourne Mountains. Perhaps you'll all come over for a holiday some time!
Hi Matthew and thanks for the comment. I hope your little girl didn't hurt herself.
I like your website, especially the clever idea of grading how stressful each place is!
How old is your nephew? If his parents haven't already done so, I'd recommend the NAS as a source of good information and support. I'd be more than happy to talk about my experiences if they're interested too.