So we've got a nice, shiny, clean, new (nearly) car, and the first thing we do is to go and get fish and chips. Mind you, these weren't ordinary fish and chips, these were award winning (Millars in Newtownards) and were well worth the price of stinking up the car a bit. 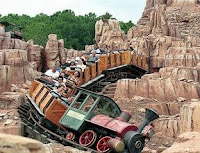 On Monday, M. (NAS befriender) came round bringing a few big cardboard boxes with her. Right away, Duncan was instructing her on how to make a Big Thunder Mountain train, which I was able to finish off later, to his delight. This is his Big Interest of the minute, and he spends ages looking at pictures and videos of it on the web, then asking me make lots of little paper trains. He has also busied himself with writing the words out on paper and yesterday I came across him making a really nice picture of the mountain and tracks using the Paint program. He's also singing, 'She'll be coming round the mountain when she comes' very frequently, complete with dancing and clapping. He liked my version, 'He'll be coming round big thunder mountain...' though he usually asks me to stop singing if he hears me. 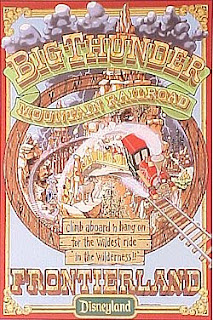 Today though he found this poster, and wanted me to draw it. Well, fine, it wouldn't look as good as the original, but I was willing to have a go. I carefully wrote out the words and was colouring them in when a little insistent voice starting telling me to 'fix it, need a Huh, put in Huh' and I saw that I'd written 'TUNDER', but my smart and observant boy wasn't going to let that go by uncorrected. The poster (with THUNDER spelt correctly) is now hanging on his bedroom wall.

What is that thing about following their interests again?

It's such a pity that he won't come with us to Disneyland Paris. I think he'd just love to see this first hand, but he knows best what he is and isn't ready for, and for now, flying is just too big an aversive.

Both boys have been making progress in their reading ability. I can see how reading is already helping Duncan to figure out the words that he hears but can't quite make out. It's also clear that he is using phonics to decode unknown words. I was surprised by that, but it's so interesting to see.

And Happy Valentines Day to all you romantic types!

We have similar issues with ours - can spot a microdot in the wrong spot and yet walk into a wall that they didn't notice at the same time!
Cheers

Big Thunder Mountain is one of my favorite rides, too! I'm sure Duncan will enjoy it when he's ready!

Aha. Sam and I got stuck on the Big Thunder Mountain ride in Disneyland Paris. It broke down, at the top. We were stuck up there for about 30 minutes. After 10 minutes I started freaking out because of my claustrophobia (see my MRI scan post, doh) - but managed to hold it together because Sam was with me.
Ah, fond memories.

My lot loved Big Thunder when we were at Disney. I'm too much of a wuss to go on those sort of rides though, lol. Going too high on a swing makes me feel queasy - I'm such a lightweight!
I'm sure you'll have a fab time :-)

Well, Lady and I will give it a go when we're there. I hope we won't get stuck; well done for staying calm there Bree! I'll take lots of photos and video footage for Duncan.

The H in thunder is very important. Thunder is a noise that comes along with sometimes rain and lighting. Tunder, Whats that? :)