These were taken in W5, when our friends were over with us a few weeks ago. Don't I have some fine children! (See, who's playing with toy trains in behind Lady!)
Then there's Thomas looking oh so grown up! 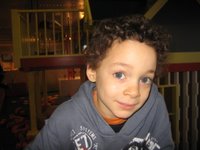 Last Sunday, Duncan finally persuaded me to make this cardboard Percy train. He'd seen a photo of something similar (only much more professional looking!) when he'd been Googling his beloved engines, and kept asking me to get 'cardboard, green paint, red paint, yellow paint, black paint.'

I pulled them all out of my seldom used art box and we all went to work, with Duncan directing proceedings 'yellow number six, that size (and he shows us with his hands) goes there.' He loved it when it was finished.

Gordon has been away since Tuesday and will return on Saturday; another conference, this time in Prague. Nice work eh!

We've been getting along fine, We had friends over yesterday. Thomas was delighted to hang out for ages with his bestest buddy and Duncan loves the Crazy Frog music toy we were so kindly given. Lady and the boys were playing some macabre game that involved at one stage, leaving some of the bits of Gordon's plastic teaching skeleton (the one we store in the closet) in a corner of the garden, sprinkled with strawberry milkshake mix ('it's supposed to be blood'). They had a load of fun, and I had, as always, a really nice chat with my friend.

Today, they boys took turns on the PC. Thomas played his Jojo in Numberland game all the way through (showing some pretty advanced maths skills) and then Duncan took over. He called me over to help him, and I looked at the screen. He had typed 'fiorence magic roundabout' into Google. He learned how to write 'Magic Roundabout' by himself yesterday, and I had written the word 'Florence' down for him a few days ago. He was obviously typing it from memory, just mixing up the i and l keys. What a guy!
at 11:22 am

Boasting is definately allowed if the children involved are that gorgeous. When did Thomas grow up so much! Hes a proper boy instead of the little toddler face he had a few months ago! And Duncan is very clever, we always knew that.
LOL to all, C x x

Lovely children. Percy is not bad either.

Hey, thanks you two!

Lovely photos. Great Percy. Impressive bit of independent writing too. Passions are such motivators for all of us, don't you think?

Hi Sharon,
What fun ages your children are. We have the same around here. My girly daughter is 8, and our 2 sons are obsessed with trains. One of them is 6 and one of them is 5.
Your children are beautiful and look amazingly happy. How proud you must be.
Boast away.....