After all the drama and mood swing of the past few days, yesterday was delightfully calm and productive in comparison. Lady got stuck into her maths book, and worked really hard. Thomas mostly played PC games, especially The Polar Express and Timez Attack, a free downloadable game. He's played it so often now that he can answer many of the multiplication questions himself. He also read for me; Brown Bear, Brown Bear, What Do You See? We're going to make our own version of that book today. He might even decide to draw something other than a rainbow (the only thing he currently will draw) to illustrate it!

While the others were busy, Duncan and I remade his 'Trevor' book on the computer. We Googled images and he chose which ones to use. He also picked photos of me and himself, then instructed me on where to place everything on the page and what size to make them. We're very proud of our efforts, so I'm sticking it on here!

In the evening, I took Lady swimming. She went in and I watched from the side. I have never seen her swim before, she swam the width of the pool, and has never had a lesson, but splashed about lots with her friends at her summer scheme. I'll go in with her when my hands heal again (my intermittent eczema problem) and help her develop a better style. It was lovely going out alone with her though. She is such a great girl, so happy and positive. The town was lit up for Christmas, and she declared everything to be gorgeous! Then in the pool, she kept catching my eye and giving a little wave, before diving under the water!

And now, our book! 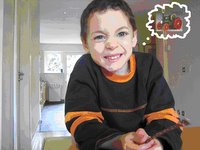 The man in the train shop puts Trevor into the parcel. 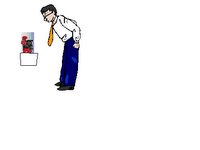 Then the man brings the parcel to the Post Office. 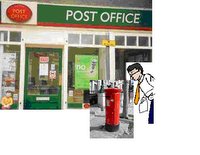 The postman puts Duncan's parcel into his bag. He brings it to Duncan’s house. 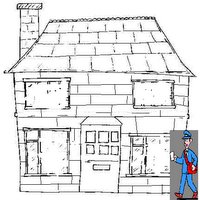 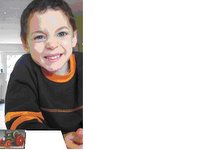 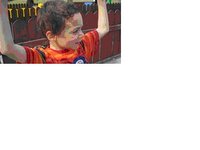 What a cute book -- Duncan should indeed feel proud of himself!

Awww!
That is so adorable!
You guys should be very proud of his book!
Still feeling broody, Sharon? ;)

Thanks! I think we'll be making many more like this.

soapbox mom, only when I've lost all sense of reality! The main problem is, it takes 2 and only one party is interested!