Duncan loves Thomas the Tank Engine. Of all the book formats depicting the bold Thomas and his useful friends, his favourites are the slim hardback editions by the publishers Ladybird and Buzz books. 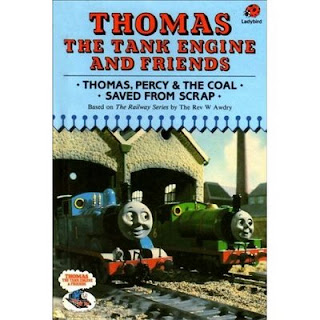 He's been trying to collect the full quota of these books over the years, and since they're no longer being produced new, we have to buy them second hand via charity shops and internet shops or they're received as gifts from friends whose own children no longer want them. Recently he discovered a series of YouTube films from an obviously similarly dedicated fan, who has shown pictures from the books with audio from the Thomas and Friends TV series. Duncan has taken lots of screen shots of these and then adapted them with other images and even his own text, then printed these out on our old monochrome printer, coloured them in and stuck the pages together to create his own books.

Here are some of the images he made. This is his version of the back inside cover, listing some of the other titles in the series. It even has a bar code. 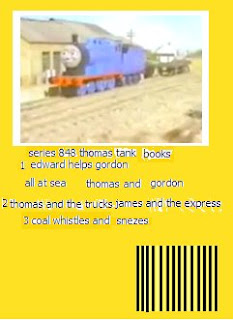 These are some of the inside pages that he has adapted with his own version of the text and his preferred choice of pictures. 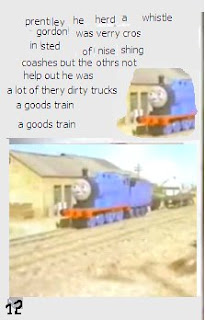 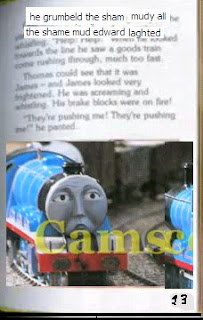 Presently he heard a whistle. Gordon was very cross. Instead of nice shiny coaches he was pulling a lot of very dirty trucks.
"A goods train, a goods train!" he grumbled, "the same of it, oh the shame of it!"
Edward laughed.

I can see a few places where he has misheard the words and tried to fill in as best he can with alternative words. I like the use of "the shame muddy" for "the shame of it"! The spelling is interesting too. He's managed to spell some difficult words properly and has made some good approximations for the rest.

I asked him to read out for me and told him the correct words for the ones he mixed up, but he's so contrary he insisted on his own version. I reckon he probably did hear what I said but just didn't want to lose face by admitting he had heard it wrong.

Here's another of his self typed pages. Though the story is about Gordon it's illustrated with pictures of Thomas, one of them taken from his Train Simulator program. I'm sure there's a perfectly reasonable explanation even if I'm too blinkered to see it. 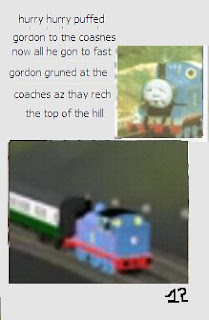 "hurry hurry puffed gordon to the coashes
now all he gon to fast
gordon gruned at the coashes az thay rech the top of the hill."

I don't think that needs any translation from me.
at 12:20 pm

those are fab, and I particularly like that you can do it from memory - there are a few books like that here too :)

sharon have you tried www.BookMooch.com for the books?

And... what about Blurb.com where you could make up one or more copies of a Duncan special in either hard or soft back. It would make a special pressie for the Grans at Christmas

A little bit of me so sad to hear that the LB versions aren't printed any more. But it's more than made up for by the very personal slant on the rewrites by himself. That should be a keeper for the memory chest. Have you heard about the chaps in Clare who have restored a steam train and track (5 km or some such). You likely know all about it. http://www.westclarerailway.ie/wcrproject.html

Hope the clan is doing well. We're all sashaying our way through summer, when we're not splashaying. :)

Thanks Jax. I wish I could recite lovely lines of poetry but no, it's the works of the Rev. Awdry.

@Grannymar, we always mange to source the next book on the list from somewhere. I'll add your recommendation to my online sellers.
I must try out Blurb some time. Their products look beautiful.

@Nick, I have not heard of the Clare train but if we're ever down that way I'll seek it out. We go on a restored line in Downpatrick every so often.
Glad to hear you're all splashaying, the world could do with more of that sort of thing.