On this day 13 years ago my mother, then aged 49, died after living with cancer for 10 years. I think about her very often, and not with sadness either. I'm lucky enough to have had years to know her, to be raised by her and my Dad in the knowledge that we were all completely loved and cared for. 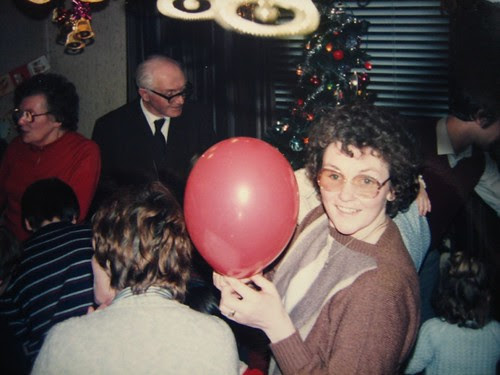 Mammy (as we all called her) was amazing. It's hard, no impossible, to explain just what she meant to all of us who were close to her and loved her. She could crack you up with a little aside about someone or something, she was smart but I don't think she knew it, having been convinced by one too many nun of her academic inferiority at school. She was to me, utter safety and comfort. She believed in me and supported me, hassled and nagged when necessary. She wanted the best for us and though I know that in one thing I have let her down, I have turned away from what she cherished most in life after family, I think she'd still be proud of me now...though she'd despair of my much less stringent standards of housekeeping.

I miss her much, I miss her when there's a big event, a marriage, birth or death. Oh how she would have loved her grandchildren! When Lady was born, I was blown over by the knowledge that I would be as big a presence in the life of this child as my mother had been in mine. I miss her some days just out of the blue when something makes me remember her, a game show (she liked to see the prizes spread as fairly as possible rather than one winner taking it all) or an overblown song performance (she was irritated by singers throwing their arms around and going all theatrical) or when I catch myself parroting a saying of hers.

Some of my most prized possessions are our old family photos and the letters Mammy wrote to me when I was away at university. In these, she wrote as she spoke, same little phrases and colloquialisms (the very things the unenlightened nuns might have marked her down for). I can hear her voice clearly when I read them.

She didn't have long enough, and too much of her time was hard and involved awful suffering. But she was our Mum, the best you could have and an inspiration to me. I think I've perfected her hugs and kisses, and there's a fair number of choice chastisements that I'm passing on faithfully.
at 8:12 pm

Email ThisBlogThis!Share to TwitterShare to FacebookShare to Pinterest
Labels: family

Lovely tribute Sharon to a great sounding Lady. I see a very strong resemblance in the photo.

Time ripens the memories, pass them on!

That was, indeed, lovely.

what a nice tribute. I'm glad you have good thoughts of her when you remember. And yep, you will see her in the mirror too. Ans you are confident enough to be a good person and live a good life - without the need for Dogma, so maybe she would understand that. xx

Manuel, the first month and the first year were, for me, by far the hardest, with raw, unrelenting grief. It got much easier. Good people who were so important to us will always be remembered.

Grannymar, thanks. I think as I've got older I see the resemblance more myself. I've got my Dad's (prominent) nose though!

Thanks Allie, it's easy to think lovely thoughts about Kathleen.

Hi Lisa, she was so ill so often in the last years that I would not have done anything to add to her worries. I can't imagine how she would have been if she was still alive and well and if I would be able to tell her how I feel about it or if I would pretend just to avoid hurting her.
I base my moral standards on what I was raised with in many things and am grateful that they did what they absolutely thought was best always.

A very moving tribute, and I don't mean the just the post. Your honesty, integrity and your dedication to your beliefs is a very fitting tribute to your mother. Your life and that of your children is the wonderful legacy she left to the world. Her loss, though painful, was not in vain. Take care

Your Mum lives on in you and in your beautiful children.

It must have been very tough for you to lose your Mum at such a young age. I have the opposite extreme in that I am now witnessing my 81 year old mother wither away with dementia and disease, in a nursing home and I have to frequently remind myself of the person she once was.

If you've not already discovered the blog 'Mum Lives On' I highly recommend it to you. I had the great pleasure of meeting the owner, Eileen, at the blog awards.

Thanks for sharing those touching memories of your Mum with us.

AnnB, thanks you so much, for what is probably the nicest compliment I've ever been paid.

Steph, thank you for reading. Yes I think she lives on in me and my siblings, in her sisters and in my dad, and in all those who loved and who knew her well.

I was not so very young when she died, but my sister and a brother were still at school so it was harder on them to have to do so much more growing up without her. It happened just a month before I married, we had not brought our wedding day forward by long enough.

I have a close in-law in the same situation as yourself and it is very hard for them all. Thank you for the blog recommendation. I will certainly have a read.

I can see you in her, and I'm sure she's enjoying this beautiful tribute. I suspect she's hassling St Peter to join her celestial facebook group 'Get Sharon back to Mass' as I write. You didn't lick it off a stone, Sharon.

I just read another post tribute to david's dad: http://mysideshow.blogspot.com/2009/03/lee-coatsfive-years-gone.html

I still miss my Dad, 8 years since he passed.

@Nick, I reckon you're right. She was a very strong woman, from a family of 5 sisters and 1 brother so it was a great matriarchal extended family for me.

@Eileen, thanks for visiting.

@Barbara, thanks, that was a lovely post too. I'd say you never really stop missing them.

@Gonzo Girl, she was sweet but she could be sharp when necessary too! Thanks, I'm glad I was able to give just a tiny insight into the woman I knew.

Hey cuz
Just got on to read your post today, no internet access is awful....
This post has to be one of the most inspiring and beautifully written...having known and loved your mammy, what you wrote was perfect and had me in tears. She was a wonderful woman who would be so proud of you and all of your achievements.
Love, Miche

Thanks Miche, there's something special about that batch grown up on the twisty lane.