I've been reading a document that is full of excellent advice on how to portray children in film and photographs (PDF link). According to the authors, images used in publicity material must portray a:

"A positive message – Children are at the centre of everything we do, and we know for certain that children want to be portrayed in a positive way in the media. There is no point in fighting for children’s rights, if we then undermine this work, by using imagery that they will find offensive. This is in fact one of our organisation’s pledges."

Before I share more of the sensitive and considerate advice contained in this document, I will reveal that the organisation who have pledged that they will not use offensive imagery as it undermines efforts to effect children's rights, is...Action for Children.

The hypocrisy this document has uncovered is astonishing, as the following few exerts demonstrate:

"It is essential that we represent them [children] with dignity, accuracy and fairness." 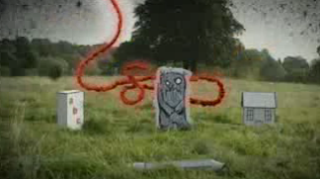 "...use positive imagery that does not exploit children and young people." 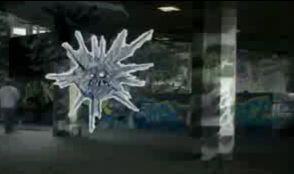 Screenshot of Action for Children TV ad.
There is guidance on how to represent children who cannot be photographed due to legal restrictions:

"Creative Services also have a large library of real Service User’s art, which can be another very effective way to give a feeling of the real person, when you can’t show their picture.

While Dan's art may (or may not, it's hard to know given the conflicting stories AFC told those of us who complained) have been used in the ad, it was used in a way which negates all the other advice on this document. And just who drew the picture of a little girl struggling to hold the massive heart "burden" placed on her, as the "Nicola" ad makes out, by having a disabled mother? The woman who narrates that ad is in her twenties now.

But Action for Children have yet more tips of portraying children in a sensitive manner:

"We should aim to move beyond stereotypes of children passively receiving services and aim to portray, for example, disabled children involved in activities.
Remember we’re called Action for Children.

This is particularly important if a photograph of a disabled child or young person is being used in isolation. Care should always be taken to ensure that any impact on the children is positive. Disabled children and young people rarely see images of themselves published, so any photograph of them may have a profound effect on their self-image."

Too right! I've heard too many stories of autistic children disturbed by how people like them are depicted in the AFC Dan ad.

The chasm of difference between their stated standards and what they've actually done with their first ever TV ad, is utterly breath taking.

"Action for Children works fearlessly in the most difficult and challenging areas relating to children. We are not afraid of any issue, and know better than anyone the seriousness of the subjects we are dealing with. Because of this, and because we aim to give our service users a voice, all imagery should be authentic and sincere. Use of gratuitous imagery should be avoided at all costs..."

Gratuitous imagery...like a big scary, hairy child-eating monster rampaging about and attacking all the normal people? 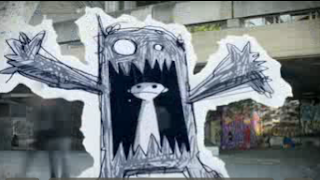 ...all images should be real rather than sensational, and should take into account the feelings of the people in them, and referred to by them. The best way to work this out is to consider the context of the image, (how the accompanying text works with it etc), and then use your common sense. If in doubt, ask yourself: “How would I feel if I were portrayed like that in a photograph?”

Real images, not sensational?! What excellent advice! And what a pity they ignored it totally when making these ads. I wonder who from Action for Children decided they'd feel just peachy to be portrayed as a monster when they approved the Dan ad?

Did Action for Children consider context when they superimposed images of a rampaging, child entrapping monster with narration saying, "My parents sought out help with my autism because it was becoming a pain in the bum"? Were the feelings of people referred to, that is, autistic people, taken into account when AFC decided to put this shockingly bad ad out? Are they considering the feelings of these people when despite many, many letters of protest, comments on their own YouTube channel and the 1665 people who joined the Facebook group protesting the ad, they keep on playing on televisions in the UK? (I'm well aware that AFC are watching the group and the blogs, their ISP has been all over this blog in the past few days, always following Facebook links to get here.)

Action for Children, whoever is reading this, please, do the right thing, follow your own excellent guidelines for portraying children and young people in an ethical, sensitive, respectful and honest manner, and get this gutter level, shock and awe, false, sensationalist and damaging ad taken off our televisions.
at 4:46 pm

They really didn't think it through, did they?

Thank's for an excellent post on a much needed aspect of this campaign.

It is a shame on the mainstream media that this work is being done by bloggers.

Truly the age of the Citizen Journalist is upon us.

"Action for Children, whoever is reading this, please, do the right thing, follow your own excellent guidelines for portraying children and young people in an ethical, sensitive, respectful and honest manner, and get this piece of gutter level, shock and awe, false, sensationalist and damaging ad taken off our televisions."

Sharon, I admire your passion for research and I love a little bit of pointing out hypocrisy in print. In campaigns I have been involved with we usually went to the talk radio shows as you find that the PR people for any organisation (including politicians) will count those as "points" against an issue. The print press will often follow the zietgeist of those phone in shows and then start to do stories. Bloggers need to email sections of their blogs into these traditional media researchers as in my experience they miss them otherwise. Rollercoaster.ie special needs parents board is a good forum to garner traditional phone in support and to spread a message beyond the interest group - to the wider community. And yes I know Damien Mulley gets quoted in the Sindo now, but most trad researchers still think of us bloggers as still wearing our pyjamas at lunchtime in our mother's basements. (ala Sarah Palin) forgive apalling grammar; Boo ate my enter key and waiting for new one from Dell-hi! xx

Just saw it on TV for the first time tonight. Infuriating.

@bullet, sadly they didn't think about anything except getting lots of exposure. They were not expecting this sort of exposure though.

@Socrates, thanks. I was surprised when I read that document to see just how blatantly they ignored their own guidelines.

@Lisa, will email you! I hope enter key was nice and nutritious.

@Biologista, it is! I know I can get het up a times when others don't see the harm, but this one is obviously wrong to everyone I've asked! I just can't imagine what AFC were thinking!

Sharon,
this is excellent work by you. The sad fact is that in spo many areas of its work Action for children doea live up to standards it sets itself. Why should autism be so different? Could it have anything to do with the corrosive effect of the demonizing of autism that has dominated the media and a lot of the academic discourse as well in recent years?