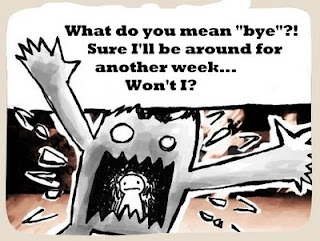 The monster was saddened by his premature dismissal.
Something smells good today.

Our coalition of bloggers, Facebook users, disability organisations and exceedingly obliging autism professionals, have partially succeeded. Action for Children had previously expressed their intention to air the monstrous autism ad on television until February 15 in emails to Barbara Jacobs and to Mike Stanton:

"Action for Children is a major provider of services for disabled children, including some with autism. We have other significant areas of work as well, and are a leading charity working with over 178,000 of the most vulnerable children, young people and their family members.

The advert will be running until the 15th February. If you would like to further your complaint or concerns about our advertisements then you can do this by contacting the Advertising Standards Authority at www.asa.org.uk They will look in to your complaint and if your concerns are upheld then we will be instructed to change or remove the advertising." (my emphasis)

But they announced yesterday that it shall now end early on February 8. This capitulation to the huge wave of protest, bolstered by over TWO THOUSAND people joining the "Let's stop "Action for Children" demonising autistic children" Facebook group I created less than a fortnight ago, can be found on their blog:

"Thanks very much to everybody who has commented on and contacted us about Dan's story.

We had always scheduled the advertising campaign to finish on 8 February and so Sunday will be the last day that the advert runs. I wanted to let everyone who is interested know that we have genuinely listened to the different perspectives that have been expressed. We have been and will continue to take these views into account and learn the lessons as we go along. We do appreciate that people feel strongly about the areas in which we work - as do we - and it's essential that we listen to these views." (my emphasis)

It's funny that they should say this. When you read the response Action for Children have given to every one of us who complained to them, it's clear that apart from a mix up about how they chose to present "Dan's" part in the creative process (did he draw the pictures or did he just approve the ad?) they have not listened to our carefully worded and detailed concerns. We've spoken of the damage it will do to the self esteem of autistic people, how it adds to the false, damaging rhetoric about autism and perpetuates the myth of autism as a shell, hence playing into the hand of the charlatans who offer false cures that release the "normal" child trapped inside the "autism monster."

Perhaps they will now realise though, that there are lessons they must learn from what has happened. I hope so.

Of course this doesn't end here. The ad is still on their website and YouTube channel. They had intended to run a postcard campaign which would use images from the Dan slide show, and there have been ads in newspapers and posters on the London Underground. The Advertising Standards Agency have yet to make a decision on the complaints they received about the ad. If anyone wants to upload their own complaint, email me for a copy of my "5 minute guide to complaining to the ASA."

Like PETA and their laughable "got autism" billboards and NYU's pathetic "ransom notes" Action for Children are realising that you don't mess with the autistic community and their allies.
at 7:24 pm

We need to shift our focus to the print media...

This little monster needs to be pulped once and for all...

@Socrates, sure. We should complain to the ASA about the print ads next.

I think they have had a shock at the level of complaints. It might make them think twice but they know we will be watching whatever they do next. The myth of a normal child trapped in the shell of autism is a real bugbear of mine. Yahoo has lists of people looking for a cure. It just makes me want to scream.

Well done Sharon. First class field general you'd make. I'm saddened however at your last sentence, 'Action for Children are realising that you don't mess with the autistic community and their allies.' Not that you said it, but that it's true, and Action for Children shouldn't be outside that group. Certainly on this occasion they are.

Well done Sharon!!!!
:)
Anyone got a pic of these print ads?

Sharon----please let Dora and me know if you'd still like to write a guest post in the upcoming weeks at Change.org. Hope it's all right to contact you here---