We're back home form our trip to Florida. Everyone had a great time and we made many wonderful memories.

I wrote a short post from Gatwick airport before boarding the transatlantic Virgin flight. I may not have been so chipper then had I known what faced me for the next 11 hours or so. 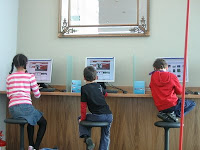 Lady, Thomas and Duncan make themselves at home in the V-room.
The Virgin Atlantic staff were all wonderful and as helpful to us as possible. We were able to check in at the Premium Economy desk and were offered a couple of seats at a bulkhead with 3 more in a row across the aisle. I thought this would work out well for Duncan; a bit more space and no-one in front to be bothered by him pushing against their seat back. Wrong! 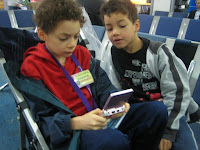 The boys playing with Lady's Gameboy just before we boarded. Duncan sits in his indispensable Major stroller.
(The Gameboy was lost somehow in getting onto the flight, and hasn't been seen since.)
Duncan expected that after a fun time on the V-room, we'd simply jump in a taxi and in a matter of minutes, find ourselves at Disney World. After all, that's what had happened when we went to Paris. He was adamant that he wasn't getting on another aeroplane and was saying, "no Virgin!"

I explained many times, just as I'd done at home, that we had to fly a long way to reach Disney World. He consented to board the plane and we tried to get settled in before most of the other passengers joined us. He was still a bit fussy when they were walking past and one charming man strided past, saying to me, "I'm glad I don't have to sit beside him." WTF? Jeez man I can understand that you and every other passenger would prefer on a 9 hour flight, to sit away from the loud, struggling boy, but do you really have to say it aloud to his already harassed mother? I thought of many fruity curses to throw back at him, but at least I had the decency to merely think them.

The badge I made for Duncan, and which he quite happily wore around his neck throughout the holiday.
Sitting beside us in the bulkhead seats, were a man with his 2 daughters aged about 4 years and 4 months. He was nice and understanding and his girls were a couple of sweethearts. Across from us were Gordon with Lady and Thomas, both of whom were perfectly wonderful throughout. They can see when I've got my hands full with Duncan's needs and curb their own devilment in response. In front of them was a row of three people in their fifties. The woman nearest basically stared at Duncan and me constantly for the first 4 hours or so of the flight. The couple beside her didn't stare for so much time, but made up for it with intense evil eye, head shakes, scowls and tuts.

Duncan was hard work. He wanted to use the toilet almost as soon as we'd taken off even though I'd taken him just before, his teeth were hurting as I think he'd bitten one of the hard lollipops I'd brought for them to suck during take-off and landing. The noise and crowds were obviously bothering him, a matter helped little by rubber neck woman and the other staring eyes. He cried a bit and shouted out a few choice angry phrases. At one stage the baby next to us cried for a while (as babies quite reasonably do) but Duncan matched her for pitch and bested her in volume. Oh dear. I tried to distract and comfort. I got him to watch Wall-E for a while, and we looked at some books. I drew a few pictures and coloured a rocket picture book. I offered the ear defenders I'd taken, and a blanket, cap and eye mask to reduce the stimulation, but all were refused. I worked really hard the whole time, and bless him, so did he.

Once when the grumpy two-some next to us gave a particularly nasty look at his distressed sounds, I called to them, "Please, he's doing his best." They lent back to avoid me, and I spoke to rubber neck woman, asked her to tell them what I'd said and added, "this is hard for him as he's autistic." She said that they didn't speak English. They were obviously fluent in the body language of disgust though. Gits. Rubber neck woman took the time to exclaim that I must be exhausted every night after looking after Duncan, after all, as she said, "I'm exhausted just watching him!"

"SO LADY, LOOK THE HELL AWAY, TURN YOUR DAMNED TV ON AND WATCH BATMAN OR SOMETHING," I felt like replying. Instead I explained briefly, as I really didn't feel like chit chat, that he was under undue stress and normal days are nothing like what she was seeing.

Eventually after about 6 hours of this struggle, he consented to wear Gordon's super duper noise-reducing headphones. By then it was about 10pm UK time and we'd been awake since 5am, so he finally settled and slept for a few hours. Phew. 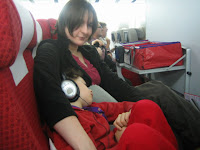 Asleep, at last. Do I look worn out or what!
At Orlando International, we flew through customs and immigration, encountered staff who were all pleasant and helpful and I got a kick from being called ma'am. A few hours later than expected, we arrived at our hotel apartment, finding it large, comfortable and clean. It's a pity the few hours sleep Duncan had on the flight sustained him for a night of fidgeting and bed hoping!

And just in case any one's wondering, on the flight home, we arranged to sit in the rows of 3 seats alongside the galley area, thus reducing the number of passengers around us. Duncan sat between Gordon and myself while Thomas and Lady sat behind us. It was an evening flight and we'd been on the go all day. Duncan wore his cap pulled low over his eyes, ear defenders and had a blanket around his shoulders. I'd changed him into his pull-up nappy and removed his shoes. He cuddled me and Gordon gently stroked his feet and he fell asleep before the plane had even left the runway, remaining asleep for the entire journey, Yeah!
at 10:48 am

Email ThisBlogThis!Share to TwitterShare to FacebookShare to Pinterest
Labels: autism, family, getting away

Last night while updating my blogroll, I thought of you Sharon and wondered how the adventure was going.

Some passengers can be so selfish and rude. It always bugs me. It is difficult for any children to stay quiet in a confined space for a long stretch of time.

Oh the holiday was marvellous. Even though I've whined about the flight over, in many ways we learned from it and Duncan known what to expect better if we ever fly long distance again.

I know that Duncan will have been irritating to listen to and I do sympathise with the people in range of his noise. But I do wonder exactly what they expect when they're on a flight to Orlando? And also, the plane itself is so loud, that wearing your free earphones and listening to one of the many choices of films and TV shows available, would have damped out most of the sounds from the upset children on board.

And heck, it's not as if I was sipping Martinis and reading Heat while ignoring him. I was trying at all times to lessen the impact of his distress on others.

Glad to hear that the trip was good.

We went to Disney World three years ago, and each year since the kids campaign for us to return there.

Hi Joe, nice to hear from you.

Can't say I blame your children in their efforts. I want to go back some day too!

hey cuz
glad to hear you had a wonderful time, looking forward to seeing you all soon.
Miche xx

You earned your vacation, ma'am. I hope it was wonderful, and welcome home. As for the flight, I no longer have the forebearance to keep my mouth shut when idiots make idiotic remarks. So bless you for that. I also enjoyed your 'bed hoping' typo towards the end of the post. It kinda describes four years in college for me. Yes, I know how nerdy it sounds, but it gave me a laugh anyway, so feck the lot of yiz!

Hi Miche, it'll be nice to see you all soon. Hope you're coping with the sad loss of an amazing woman.

Nick, was it a typo or is it that I canny spell?
(I'm laughing at the thought of Nick's hopeful college nights now.)
And feck you too darling!

Sharon you deserve a medal.There aren't many people could handle that as well as you.

I'm pleased to read about your trip - been waiting for your stories. Hoping for more pics, hint, hint.

You do have a good attitude about it all. I think the disgruntled people are disgruntled wherever they are - not just on planes. Like Voldemort, perhaps we should pity them. lol!

@Dave, thanks, I'm flamin' world class, me!
I handle the grouches as I know I can blow off steam about them later here.

@Barbara, I like the Voldemort idea. I'm going to picture the complainers as red-eyed, evil wizards who get prissy about someone just saying their name from now on

More pics on the way soon...