It's Duncan's 7th birthday, though he insists he is still 6. He's had a nice day. His Granda came around yesterday with a present; a Brio train set, with a level crossing! He set it up immediately and played with cars crossing the tracks. 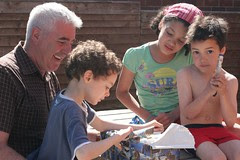 Late in the afternoon, the whole family took him to his favourite toy shop so he could choose his gift. He picked a fancy station for his 'noisy trains'. He and Thomas played with it for hours when they got home.

When I'd asked him last week what he wanted for his birthday present, he said,'Percy runs away, Ladybird book. Henry stuck in the tunnel, Ladybird book.' So I ordered them from Amazon and hid them in my room. I gave them to him this morning, still in the brown padded envelope, which I know is much more exciting to him than wrapping paper. He was delighted with his books and I had to read the oh so familiar story of Percy the cheeky engine, right away.

It was warm and sunny today, and the paddling pool was out. The children from next door came round, and Gordon's mum joined us in the afternoon. I'd made a chocolate cake, and decorated it with an icing train track, then stuck his toy Percy on top, and jutting into a pile of the chocolate icing. This was to recreate the scene in 'Percy Runs Away' when Percy runs into a bank of earth. Duncan thought this was marvellous. We all sang happy birthday, he sang loudest of all, but covered his ears all the same!

Gordon wanted to take his photo, and Duncan negotiated with him, agreeing to pose only if he could also hold his new Ladybird book. So the first few photos were of the book covering his face, then he lowered it for, what I'm sure you'll agree, is a very lovely birthday photo! 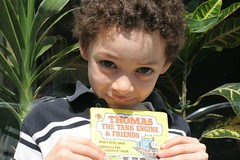 Happy Birthday Duncan! What fun! and yes indeed, a handsome photo with his new book.

Enjoy the gifts. May you have many great adventures with them.