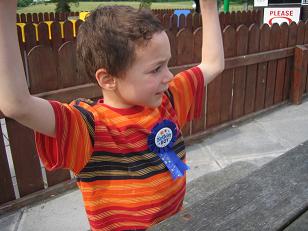 Duncan was 6 years old on Saturday.
Wow, six years since that magical night when he popped out (you know what I mean!) just ten minutes before midnight, six years of getting to know and understand each other. He is the most amazing and beautiful child. He really keeps me going; I have to move fast to keep up with him! But I have learned so much and am honoured by the better understanding I have of what makes us all human, since having my special boy. 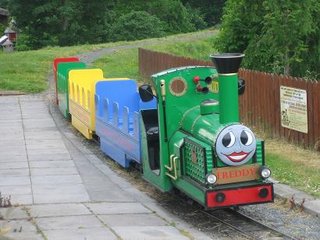 We celebrated in an appropriate manner by driving to a nearby countryside park which has a miniature railway which Duncan enjoyed so much, he went on it twice.

We gave him a great Captain Hook pirate dressing up outfit earlier and he'd put it on straight away, then ran to his dressing up chest to find the toy hook and pirate hat he got on a previous birthday, but hadn't worn much till now.

The second day of celebration was on Sunday when we had a party at home. Our friends came over with their boys and we were joined by all the grandparents. The men got busy building a barbecue (as Gordon had only bought it that day!) and then did a bit of manly cooking over coals, while I stuck some sausages in the oven for the poor, starving children who were getting fed-up waiting! We were all well fed and watered eventually. 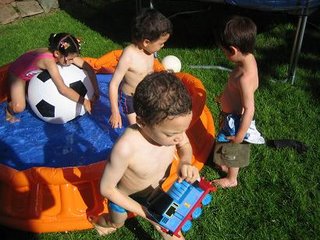 It was a lovely, sunny day and we all sat outdoors. The children took out the paddling pool, and after the men again did their duty with the pump, Gordon scooted out to the shop to buy a hosepipe so we could actually fill the thing. Meanwhile, Duncan came out with a glass of water which he tipped into the pool. He then jumped into the pool, splashed about for a while,'cause he had to test it, right! Then he went back inside saying to himself 'not enough'. He added a few more glasses, testing it each time! They had such fun when the hosepipe was finally fitted and switched on, well, my Dad did anyway. He was chasing Duncan and Lady around the garden with the water!

I took out his birthday cake and everyone gathered to share it. I asked Duncan if he wanted us to sing happy birthday and he said, emphatically, no! Fair enough. So we just said happy birthday, tucked in and that cake disappeared fast.

Happy Birthday Duncan! Glad the weathers been decent so you could all enjoy the day!

The weather has been fab! We've all been loving this sunshine.

I was interested in your comments about hair washing. My son is 6 years old and autistic and hates having his hair washed or cut.

Thanks for the birthday wishes.

Andrea, Duncan started to speak late and still has very limited speech, which is getting better all the time. We don't see a speech therapist at the minute. The speech therapist he had while he was at an autism specific nursery (aged 3-4) was great. She used a lot of ideas from the Hanen 'More than words' book. I have this book too and think it's very good.
What we do is to use limited speech when interacting with him. He also recites loads of stuff from films and computer games so I say it along with him and act out the scenario or play games that use those words, so he can gain a better understanding of what they mean.

Sharon, thank you so much for you reply, I will try the local library for the book you mentioned. We have been undertaking an ABA proramme with Peter which has transformed ALL our lives, especially Peter's!
Duncan looks such a happy little boy in your photographs, I am sure you are very proud of him and his achievements. Well done!

Happy Birthday Duncan!
Sounds as if you all had a fantastic day! :-)

Thanks for the birthday wishes Emma and EFT!