[Warning-  in this post, written in support of the This is Autism flash blog, I've quoted some of the dehumanising language used by Suzanne Wright.] 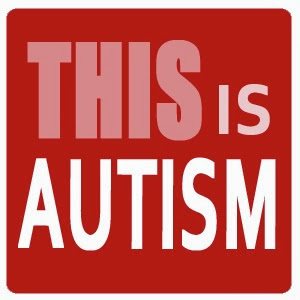 I don't get to say what autism is. I'm not autistic though my thirteen year old son is. In learning how to parent him, I've met other autistic people, read their words and I've listened. I'm qualified to say what my son is like, how his awesomeness and autism intersect. I'm also authorised to say that the wretched "Call for action" edict by Suzanne Wright, co-founder of enormously wealthy and powerful, USA organisation Autism Speaks, is revolting, damaging and does not represent my son or my family. Nor does it tally with anything I have learned about autism in the past 11 years.

"This is autism" Suzanne claims three times in a piece filled with falsehoods, bigotry, hate and a total negation of the existence of autistic adults. She does not represent my family when she says that we are "not living" but are merely "existing". Such hubris! She honestly thinks she can speak for all of us. She invents statistics; "2.3 million [US] dollars to care for one person with autism for their lifetime" and "Imagine three million of our own – unable to dress, or eat independently, unable to use the toilet, unable to cross the street, unable to judge danger or the temperature, unable to pick up the phone and call for help."

I'm offended and contemptuous. My son's existence isn't adding to a crisis, he's no national emergency. He's a disabled young person with his own challenges and talents and it's my job to raise him. Autism is part of the naturally occurring diversity of human experience. Unlike Autism Speaks, I don't want a world in which we "make autism a word that we only see in the history books."

Sure I am often worn out and I worry about and struggle to understand my children- all three of them, autistic and non-autistic, just as most parents do. Autism brings more challenges to the mix and I have had to battle with service providers and education departments to have my son's needs met. I've weathered the stares and comments of judgemental strangers. What hurts and exasperates me most of all though, is dealing with the perpetual dehumanising of people like my autistic son. He's a great kid- if you are ever lucky enough to meet him you'd see that. He doesn't deserve to have his very humanity constantly called into question.


I will do all in my power to prevent Autism Speaks from gaining a foothold in Ireland and the UK. I request that anyone who has ever contributed to that organisation now withdraw their support and that academic departments think very hard about whether to accept funding from them. An organisation that spreads this rhetoric of fear and hate ought to be shunned.

Email ThisBlogThis!Share to TwitterShare to FacebookShare to Pinterest
Labels: disablism

This is bullshit. you are upset because she views autism as a disease and you view it as a normal thing.... almost as if it were a gift. autism is a problem and I am in full support of finding a cure and prevention so that it will only be known in history books. no one is saying that autistic people aren't human, they simply can't function as others can. That is a fact. I see no problem with an organization that recognizes that and wants to change it.

Response to Angie specifically and anyone else who shares her point of view (acknowledging it's been a year):

I don't view autism as a "disease" or as a "problem" but I also don't recognize it as a "gift". I view autism as a deviation (possibly genetic), much like left-handedness or colorblindness. Much like the deviations I just mentioned, there is nothing to "cure" or "prevent". Because of this, I agree with the words "they simply can't function as others can" but not the sentiment behind it. Much as left-handed people and colorblind people adapt to being to being "normal", so do autistic people.

I wonder how your response would sound if I quoted it but replaced "autism" and "autistic" with "small-mindedness" and small-minded" respectively?