Tony Humphreys' awful article has been criticised in several places. Lisa wrote how reading it made her feel she had:


stepped into a time warp that has taken us back to the 1950's when Autism was blamed on so-called "refrigerator mothers" whose coldness towards their children caused them to be developmentally delayed and socially withdrawn.

She also makes an important point about Humphreys' academic pursuits:


Disturbingly I found out today that he lectures on "interpersonal communications" and "parent mentoring" at University College Cork. So potentially there is a student being indoctrinated with these ideas right now.

I have emailed the Vice President for Teaching and Learning at University College Cork and The Centre for Adult Continuing Education, asking them to investigate this matter, writing:


Dr Humphreys even goes so far as to assert in his article that the very existence of autism is not a scientific fact, an utterly ridiculous assertion. These are toxic, false and damaging ideas. It is very worrying that a university of such repute would allow someone holding these views to teach particularly on courses taken by parents and those training to work as Special Needs Assistants.

I look forward to hearing their response.


I had emailed Professor Simon Baron-Cohen yesterday to alert him to the misrepresentation of his research in Tony Humphreys' article. He was kind enough to reply that he was going to tweet a public response; 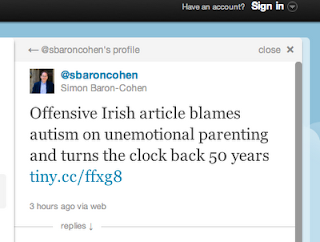 It doesn't look good for Tony Humphreys when the researcher he quoted in support of his theory is willing to condemn his article publicly.

Where I focussed on the inaccuracies of his article and the harm they will do to parents, especially of newly diagnosed children, Siobhan O’Neill wrote about growing up with her autistic twin brother, demonstrating clearly how nonsensical Humphreys' notion that a parent can make their child autistic really is.

Another post at Three Mile Limit took issue with factual errors in Humphreys article and offered to give him a name for his  hypothesis, "Refrigerator Cousin."

Mike Stanton examined more closely Humphreys' claim that the "Myth of Autism" book he referenced backs up his notions and found that not even this was true:

Skip to page page 293 when the authors clearly state


We are NOT saying any of the following: 1. Autism is a condition caused by poor parenting.

That is concurring with Humphreys attack on parents who possess few or no heart qualities? It seems only right that ill-written books should be ill-read. But, bad as it is, The Myth of Autism does not deserve to be as badly read as it was by Tony Humphreys, if he read it at all.

Bock the Robber writes about Humphreys former role as a cleric:


the denunciation of parents in the article of Tony Humphreys has a smell of clericalism about it.  This article sounds a lot like the sort of judgemental nonsense we heard from priests and bishops over many years.

After listing the errors in the Examiner article he makes a valid point:

If only we lived in a world where it worked like this.


The last post I have noticed is by Magnumlady who writes:


We are living in a world where it’s hard to get by if you have a disability (especially an unseen one) and are trying to get people to understand about autism. It’s not helped by articles like this.

Many people have expressed their hurt and shock at the Irish Autism Action Facebook page where the article was transcribed.

Eventually The Irish Examiner made a response, of sorts. This afternoon they released the following on twitter:


"We will be publishing a full range of reaction in tomorrow's edition relating to Tony Humphrey's column in Friday's Feelgood." link


"While giving a platform to diverse opinions is central to our journalism the views of TH on autism should not be mistaken as our own." link

(The irony that a piece which made so many feel so rotten was published in a section entitled "Feelgood" is not lost on me.)

I find it astonishing that the Irish Examiner feels this is an appropriate response. No one who has complained that the article is damaging and toxic believed that it was an editorial. It was not clearly marked as an opinion piece.  Even if it was, it was irresponible and unethical to give a platform to such a piece, lacking as it did all veracity and which has caused real harm.

Already I have witnessed the people who argue that there must be something to Humphreys' arguments- that there are too many children labelled, that diagnoses are made too quickly, that perhaps parents need to look at themselves- as if we don't! None of this is based on fact- but newspaper articles like this one make it harder for families to convince people that their children's disabilities are real and that they require adaptations and support.

The Examiner have contacted some people who emailed them (not me) and asked permission to publish their letters. It appears they will be hosting a vox-pop, as though there is any doubt that Humphreys wrote an article entirely lacking merit. He was mistaken, the paper should apologise and retract the piece.

Please let me know in the comments if there are any other posts I may not have noticed yet so I can add them to the list. Thanks.
at 5:09 pm

Boo yeah! excellent round up. Maybe if their response is not adequate we will ramp this up a notch. I linked up with another new parent as they joined the autism club today. While I was welcoming them I was conscious of the fact that added to their natural grief and bewilderment was the potential for even more self blame thanks to that article. Thanks to you they have further reading that may be a whole lot more reassuring. xx

A great blog. I for one wouldn't buy the Irish Examiner again. I don't think the article should have been published.

@Lisa, Yes, I saw that and thought about how all this will affect the family new to this world.
I'm very worried about what exactly this "range of responses" will be- will it just exacerbate matters?

@Val, I think they have lost many customers over this. And thanks.

Yes he does belong to the PSI if you check their website his name is listed.

I did check the register - for both Tony Humphreys and Humphreys:

"PSI Psychologist Online Register
Sorry... No matches for your search query were found in the on-line public register."

Likewise other people have checked other registers, and he seems not to belong to any. Nobody knows how he merits the title Dr either.

I cannot find a single clear reference to his qualifications anywhere. It is just "glossed over", in my experience, usually a very bad sign. Where qualifications exist, people blazon them by internet as a general rule.

I was horrified by this article, on behalf of all of you, but I feel bound to try and tell you this was a taste of what it feels like to be an autistic adult, like me.

Recently I was informed by an autism specific advocate younger than my son that he should make my decisions without consulting me because autism impairs my judgement. My reply would not be printable in polite company.

But believe me, it was just as insulting, offensive and plain WRONG..and it happens to us all the time.

You will do a valuable public service if you preservere in your search for the precise qualifications of this "renowned" etc blah blah. which University, what year etc etc.

Most professionals have no problem publishing these details as a matter of course, many are justifiably proud of their qualifications and use them as a credibility booster.

It is important to persist in this as the psychology profession is riddled and infested with charlatans and scoundrels.

If a psychologist happened to be an Ivy league , Oxbridge or Trinity Graduate I am reasonably confident that this fact would not be hidden.

This is another blog I found re the Autism article.. http://www.mamanpoulet.com/

I found the article to have the potential to be very harmful for many. The inference that the condition does not exist could certainly give the powers that be an open field for shutting the doors to parents on much needed services, already stretched to the limits. Could the state be looking to save some more money? I just wonder..

@Anon, I don't think anyone has uncovered his qualifications or which professional bodies he is registered with yet. Will keep trying to find out.

@Gaye, I agree that if he had good qualifications, someone as conceited as he clearly is would make sure everyone knew.
I've heard so much over the years that backs you up too on how badly people treat autistic adults. It's unacceptable. I know also that often the ill treatment comes from the parents of younger autistic children. I've witnessed far too many "functioning label" arguments and will speak out against those too. What you were told about your "lack of judgement" is disgusting and I'm glad you gave an appropriately colourful reply.

@GiftedBlogger thanks for the link to Suzy's blog. It's a great post.
I think that many in the state would be delighted to have an excuse to cut services.

An opinion from Trinity College:

I must say they have stirling support and understanding for those with Aspergers in the College. Many of whom would not have attained their potential without it. Provision and support is important at all levels. Only then do they have a chance at leading as fruitful, independent and fulfilling lives/careers as possible. These are not only in the sciences, engineering and Math fields.. There are quite a few whose great ability to focus on a particular subject or facts/details around same in given interests has lead to careers in Arts &/or Humanities subjects as well. For the highly verbal (and there are some of this ilk... ).. Law and Debate have been an attraction. Point being.. we need our services from prenatal through third level to help give them their best chance to move forward in whatever direction they need to go.. without which it would be very easy to fall through the cracks and end up going nowhere fast. The reason the services exist is mostly due to those 'caring' (not uncaring and cold) parents over the many years doing battle.. and I for one salute you.. (and shake my own hand too, if I may, being a been there done that parent.. ;-D)

Just for your info again... Here is a link from a well written blog in the USA..that has picked up the story/article. This topic could run... Support from abroad is happening.. http://lizditz.typepad.com/