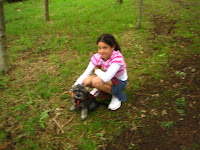 Sunshine and showers, that's what we've had for most of this summer. I've noticed that even on the wettest, greyest and potentially most miserable day, the sun breaks through for a time. The children run out when the rain eases or stops. I've heard complaints about the terrible summer we're having, but being with the children has allowed me to notice how much sunshine there's been too.

We've caught loads of rainbows. When we all took Pippy for a walk in the evening, a spectrum of colour reached across the sky. We headed for the path beside the station. Duncan took a turn holding the lead. Pippi loved it.

The boys played at being steam trains for a while. The ran along the path, then when it forked, Duncan said they were going down the 'branch line' and they dashed down 'Gordon's hill' shouting "Stop wheels, stop! I'm going too fast!" and other lines from Thomas the Tank engine stories. Then they both ran straight back up the hill, and repeated the game multiple times. They sure are fit. 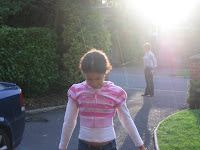 On reaching our street, Duncan had to stop to admire the red Renault Clio car and try to sneak a look at the front door of the house where it's parked. There's a thick, high hedge surrounding the house which has heightened the mystery of the house and its inhabitants. It's all very exciting.

I stood in the drizzle, adopting my usual stance of Duncan observation, ready to call out or, if necessary run to intervene. I have become slightly more hands off as time progresses.
at 8:39 am