I've just written about our wedding on April 9 and described what a beautiful and perfect day it was. I had married before, 19 years ago. It was an unhappy marriage that I tried for many years to fix before coming to accept, with the support of many people around me and the help of Women's Aid, that staying married would destroy my life and likely those of my children. The separation happened four years ago and the horrendous task of divorcing took a few years more.

I am forever grateful to the people who helped the children and me through that time. I am indebted to all those who over the years, campaigned to change the definition of marriage and make divorce legal. They ensured that children receive the protections they deserve and their efforts meant that I could be free from a terrible situation and, as a person who'd had to stop paid work to mind the children, was not left destitute.

For years after the separation I was a single mother of three. For one of those years, my sister lived with us and for all of them, all members of my family and our friends, have been there for us providing practical and emotional support when we needed it. We never stopped being a family even though we did not fit the proscribed model of a nuclear family. I've often heard campaigners against equal marriage bang on about how children deserve a mother and a father. What children need, as I have discovered, is to be free from abusive situations and to have access to people around them who love them and on whom they can rely. The precise set-up is not important.

I had never expected to find love, yet in July 2012 I met a man who I am now married to. He and I are perfect for each other; as I said on our wedding day, his weirdnesses and mine match! It was important for us as a couple to marry. We wanted to make our union legally binding, to demonstrate to the children that we are both there for them for the long haul. We wanted a party and a chance to show our friends and family just how much we mean to each other. We wanted to be husband and wife.

Everyone is entitled to arrange their relationships in whatever way works best for them. My relationship is no better than that of my friends who opted not to marry. I don't think that anyone needs to marry to be committed to their partner. Many people oppose the institution of marriage for perfectly valid reasons. But what all people deserve is to have that choice. I have heard the reasons people have given for opposing equal marriage and none stand up to scrutiny. There is no reason why marriage need be between a man and a women only.

The joy we had on being able to marry, the ability to make that decision is something all people ought in a civilised and caring society to share. The only reason why anyone would deny that to other couple is because they think those relationships are less important and that is an opinion based on bigotry. Our children are listening, we need to let them know that they are all valued and that we oppose the dreadful bigotry that LGBT folk of my generation endured growing up. We need to end this ridiculous inequality in all corners of Ireland and let them ALL grow up with the choice to marry or not marry as they see fit. 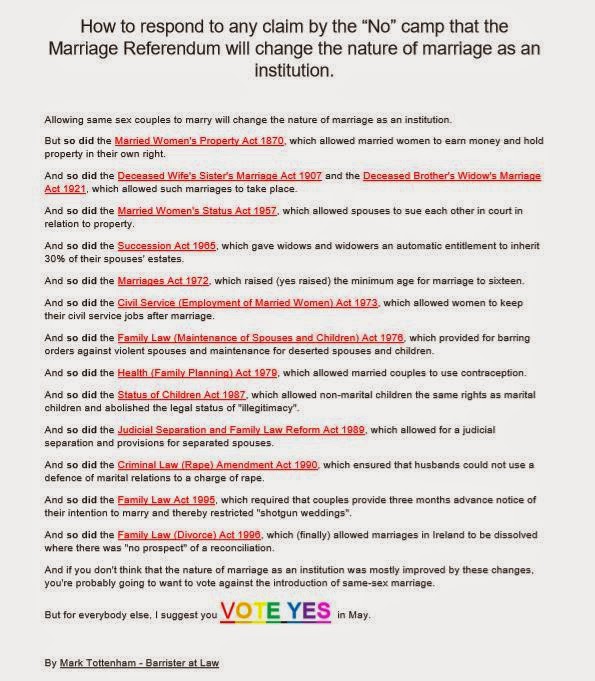 Hear hear! Whenever folk talk about the idea of same-sex unions undermining marriage I think of my first marriage and other unhappy, dysfunctional and abusive straight marriages that the same folk don't seem all that bothered about. I think of horrible marriages in the past that people got into out of social obligation and had no way of getting out of again. How sacred was that?

Marriage is stronger and more meaningful now and will be even more so when everyone can enter freely into marriage with whoever it is they love, where folk don't marry because they're pregnant or the family wants them to or they feel that time is running out for them and when folks are truly free to divorce (which, with the cuts to legal aid, a lot of poorer folk have lost).